The Paris of Joyce & Beckett: By Brian O'Shea and Sean Donlon

(published 2007: London Irish Literary Travel)
A new edition of this unique guide to Paris (first published in 1998) is now available. Four new itineraries in Paris and one in London have been added to the original five of the first edition. The new itineraries include the Square James Joyce and the Allee Samuel Beckett, Villa Seurat, the Ile des Cygnes, Rue Delambre, Rue des Artistes and many other Pars locations which would have been familiar to both writers. A Beckett Walk in Chelsea is a special centenary contribution by Tony Murray.
The itineraries are based on imaginary scenarios concerning Joyce and Beckett at different points in their lives from when Joyce came to Paris from Trieste with his family in 1920 to 1953 when Beckett''s En Attendant Godot was first staged. There is also an appreciation by Rhiannon Moss of Thomas MacGreevy''s role in introducing Beckett Centenary crossword and for philosophers everywhere there is an appropriate cartoon which reflects (we hope!) the range of responses to La Condition Humaine.

" Serves to create an extremely convincing landscape in which both of these writers lived." The Irish Post

"We look forward to seeing crocodiles of Joycists and Beckettians marching determinedly along these routes." Books Ireland

"Take this with you on your next Paris trip." Independent On Sunday

To read our article featured in 'The Irish World' please visit www.theirishworld.com/article.asp?SubSection_ID=4&Article_ID=8751

Returning to Joyce he would no doubt have looked out on the quite dramatically wide Seine at this point and seen the lines of barges and even some small ships. Would he, like Beckett later - and with whom he often completed this walk- have dwelt onthe joyous conflowing on of the river`s two arms? Very likely, Joyce and Beckett both had a love of the outdoors, Joyce once remarking to Eugene Jolas, proprietor with his wife,Maria,of transition ` an international quarterly for creative expression`, that mountains and rivers `are the phenomena that will remain when all the people and their governments will have vanished.` Beckett was also an especially acute observer of nature e.g. noting in one memorable passage in Molloy how ` in the evening light the hills that some call mountains turn indigo ` and how subtly different colour tones can hint at the existence of hidden valleys in ways which find no verbal expression but are nonetheless susceptible to the senses.

Perhaps the opening words of Work In Progress  `riverrun past Eve and Adams, from swerve of shore to bend of bay `would be running through Joyce`s mind.

The Third edition of `The Paris of Joyce & Beckett  A Tourist Guide has slightly more emphasis on Joyce after the Beckett centenary edition last time. It includes as well as the previous scenarios and itineraries a piece on `Le Dejeuner Ulysse`, an account of Joyce`s friendship with Hemingway - `When Does Joyce Come In?` , `Chasing James Joyce In Paris` by Grace Holtkamp,` Parisian Odyssey or Parisian Oasis?` examining Joyce`s alleged `nomadism`, a poem,` Seine et Liffey` , selected passages from Finnegans Wake and a list of Joyce and Beckett Societies.

The new editon has 128 pages and a blue cover with a drawing of the Opera in one corner. It is currently on sale at the James Joyce Centre, Shakespeare & Company, London Review Bookshop and Foyles. Mail order copies can be obtained from London Irish Literary Travel The Busworks North Road London N7 9DP - price incl. postage (Europe) £11.00, US and worldwide £15.00. 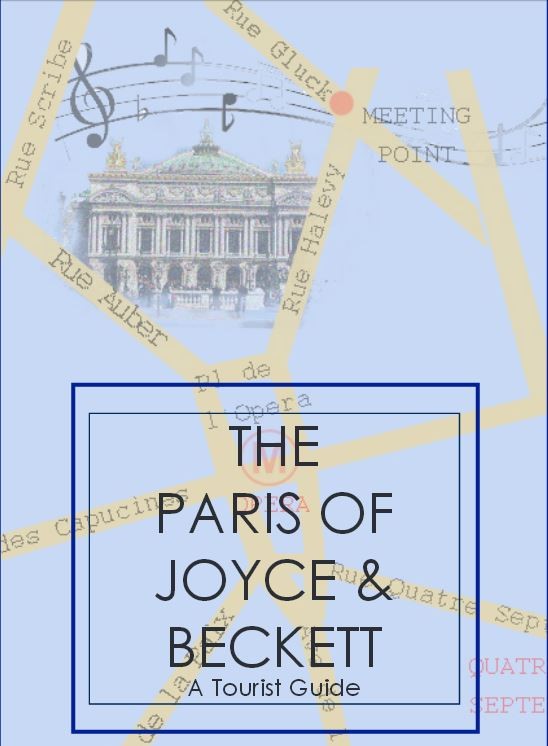 Splink!  A coin!...a franc! Then quickening drumbeat as cloud